Best Psychologist in Kolkata  Shreshtha Dhar is now available at Thought Craft  In Gariahat at South Kolkata. She deals with psychological issues of all age groups.

Find her clinic at Fern Place

Shreshtha Dhar is best Child Psychologist in Kolkata. She had her MA and M.Phil in Clinical Psychology from the University of Kolkata.

She has been practicing in Kolkata since last 5 Years and she is considered to be the Best Child Psychologist in Kolkata.

She is dealing with different life issues of all age groups.

Find the direction of her clinic below.

Last day was superb at Phi Phi island Tourist boat cruise. After returning from the Phi Phi Island we called a number, shortlisted earlier for the James Bond Island trip. Short listing criteria were, their rates were reasonable and had good reviews. A lady from that company came to our hotel.  We bargained and brought the price little lower and gave some advance to her.  we were happy with the deal, as it was lower than the lowest we got on internet.
Next day morning we were again picked up from the hotel and went to Ao Po Pier to board the cruise boat. The boat was nice and all of us were accommodated on the upper deck. Lower deck was kitchen and packed with other stuffs like canoe boats and other equipments and kitchen items. Two  small lavatories were there.  On the upper deck snacks, tea, coffee and non alcoholic beverages was sufficient for all of us. The tour guide was very nice and was assisted by two other persons. Guide was English speaking and subtle sense of humor.  Western music was playing and whole ambience was festive. 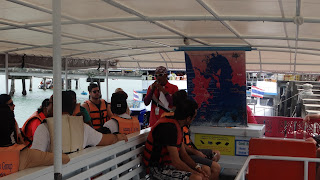 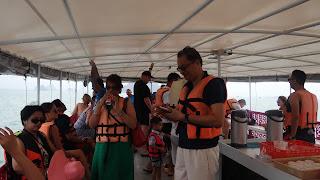 Plenty of snacks and beverages 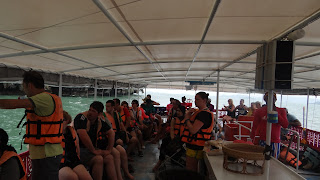 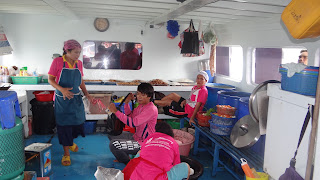 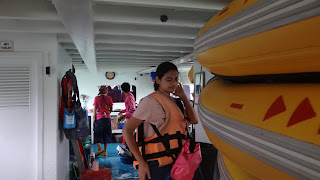 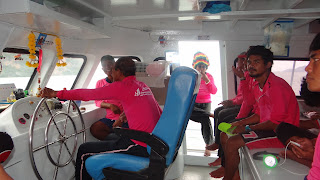 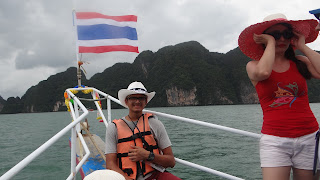 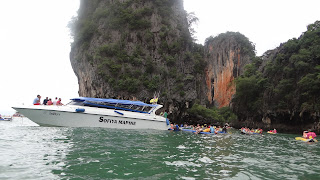 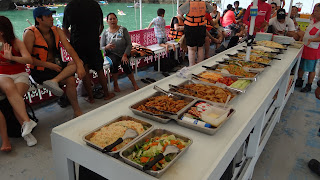 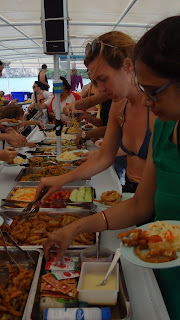 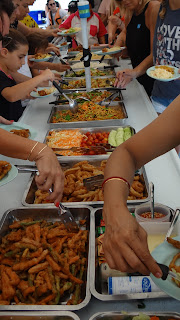 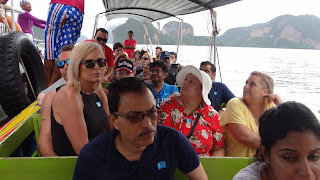 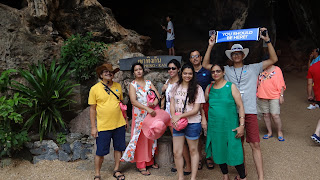 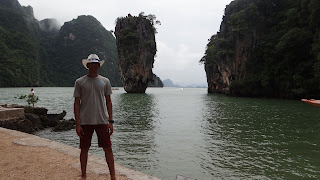 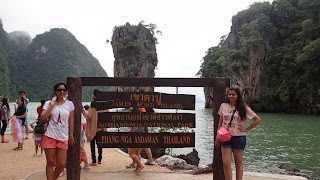 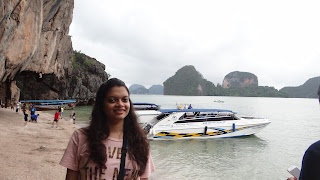 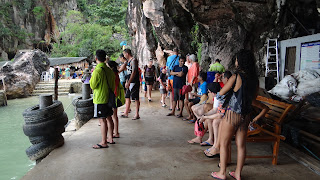 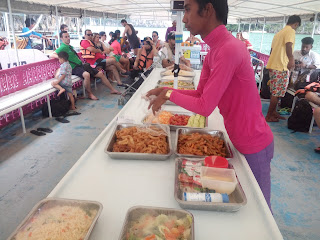 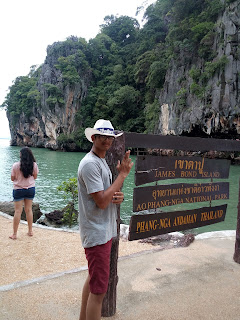 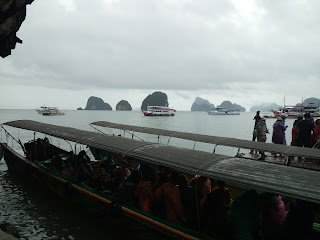 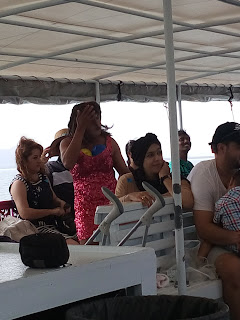 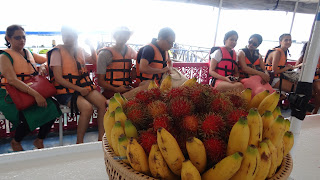 Sea on this side was calm and  much more turquoise colored than yesterday 's Phi Phi side.  Overall experience was amazing.
There were few bouts of rain during our journey and the boat deck had arrangement to cover from all sides my thick polythene and there were no inconvenience whatsoever.
At first we stopped at Panak Island and then to Hong Island at both places we enjoyed canoeing through the lime stone caves and around the rocks.  Boatmen , ours was a young boy were all very well mannered and helpful and showed us and guide us throughout the canoeing in both the places.
After canoeing lunch was ready on the deck.  Very nice spread of different foods, variety of fruits, beverages; there was nothing to complain. everything was so nicely arranged.


While having our lunch, we sailed to James bond island. Since our boat was big, we were taken to the island by a short trip on a long tail boat. This small island itself was really at an amazing location. The views all around the island was spectacular. We hiked a little on a rock to go on top and came down to other side of island.  I can assure your camera shutter will be tired.  We returned to our boat  by same long tail boat after spending an hour or so in the James Bond island. Every moment was worth.

Then we sailed to Naka island. Our boat was kept at a distance from  the shore. This place was safe for swimming and all those who love swimming dived from the boat and had a great time in swimming in Andaman sea. We spent nearly an hour there and our boat then headed for return journey.


During return journey to keep us engaged and entertained the crews of the boat along with the guide performed different entertainment programs, cracked jokes and  lady boy show. It was really hilarious.  We never felt bored and the whole day was so much entertaining and like every good thing has an end, we sailed back to the shore and returned to the hotel by same minivan.


Just don't miss this tour if your are ever in Phuket or Krabi.
Author: Sparsha No comments: